The Fray at Carmel Bay 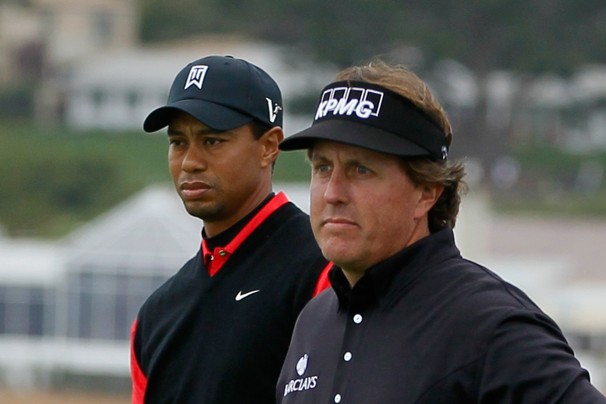 Like heavyweights in a title bout, Tiger Woods and Phil Mickelson went to opposite corners upon arriving at the first tee box Sunday at Pebble Beach Golf Links. Tiger Woods and Phil Mickelson paired up for Sunday’s final round of the AT&T Pebble Beach Pro-Am with each man looking to take another step toward restoring his place among the PGA’s top players. But instead of duking it out like memorable tournaments past, Mickelson soared while Woods faltered.

Even their caddies exchanged more words than did Woods and Mickelson!

Paired in a final round for the 10th time since 1997, they cagily stalked each other in the early going, spurred on by an exuberant gallery tilted slightly in Mickelson’s favor.

Mickelson went on to claim his 40th tour victory by mounting the kind of charge that used to be all in a final-round workday for Woods. Trailing Woods by two strokes and Wi by six at the day’s start, Mickelson played the first six holes in five under par and never looked back.  He closed with an eight-under 64 for a 17-under 269 to win for the fourth time here. Mickelson, who has come from behind in 17 of his victories, passed Woods, who carded a 75 to finish tied for 15th at eight-under 278.

Mickelson, true to form, thanked Tiger for his inspiration…

“I know that his level of play is so much greater when he’s playing his best than anybody else’s, that it just forces me to focus on my game more intently, and hit more precise shots,” said Mickelson, who has faced several distractions recently, among them a health scare involving his middle child, Sophie, and the defamamtion lawsuit he has filed against an anonymous Internet poster. “I just feel very inspired playing with him,” Mickelson said. “I love playing with him. … He brings out some of my very best golf.”

Those words had to hurt Woods more than the final score. There was a time when Mickelson folded like a road map when paired with Woods. There was a time when Mickelson’s putts would have been all over the greens, not Woods’s. Sunday, however, Mickelson – whose putter has often been his nemesis – was like Ty Webb in “Caddyshack”; everything was going in. And Woods’s putts? Well, they weren’t.

Phil Mickelson and Tiger Woods together in the final round has produced the highest rating for CBS Sports at Pebble Beach in 15 years.

Thanks to Karen Krause for excerpts from her Washington Post Article and Jeff Grouse for Getty images for the great picture!